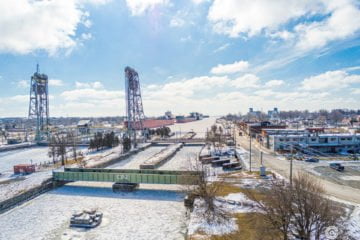 At a loose end on Sunday after dropping my beloved at work, I sent up the drone. And got this.

It took a few minutes of positioning to get the angle right. That was not helped by strong cross winds buffeting the little guy around the sky, so I kept him low, as the wind near ground level was far less.

Being sensibly cautious, I wanted him out of the sky before the sub zero temperature froze the rapidly discharging batteries and he fell. That, by the way, is a thing. It’s also why I kept him over land, just in case. I didn’t want to try and recover him from a semi-frozen canal. That would not be fun.

I set the shutter speed and other settings manually, and that paid off. Exposure was perfect, the image pin sharp, despite fighting the wind. This flying camera is a marvel.

This is a drone, not a big boy camera, so I won’t be printing this for the office wall. That said, I was happy when I got the raw image (my guy shoots DNG format) into the computer. With a little processing in Adobe Camera Raw, I was able to bring this image to life.

After doing some basic corrections to texture, white balance and so forth, it was time to tweak. Bringing up the shadows lifted the dark areas, revealing a lot of detail. I dropped the highlights a fraction to bring out those lovely clouds while keeping them light and fluffy, and lowered the overall saturation. After that I used the HSL controls to compensate, boosting the saturation just in the blues, reds, and yellows.

Moving the dehaze slider to the left brought everything together nicely, and here’s the final result. Hand crafted to my taste.

I love the clouds scudding across that birdless sky. The leading lines of the canal take my eye right along West Street out to the lighthouse, and when it comes back down the other side of the canal I’m drawn to those boats along the East wall. That ice road looks awesome.

Too much editing? Not enough? I’d be interested in any comments, let me know your thoughts. Ultimately, it’s all subjective. Next week I may try something different. Or not. With a little more love this could be even better. That’s the beauty and the flexibility of shooting raw. Can’t beat it. For now, this edit works for me. I like it.