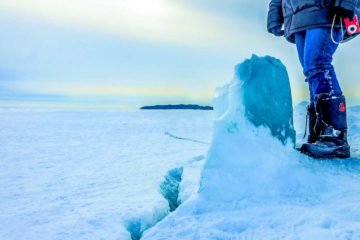 The first snows of Winter 2019 hit us here today in the Niagara region. As usual, many drivers have forgotten how to drive. The news is filled with crash reports and warnings of imminent death at every turn. Ah, Winter. How you were missed. Not.

On the slow and steady drive home I had a couple of minor skids. Ease off the gas, steer out of them. Nothing to raise an eyebrow over. Correct the skid and drive on, that’s the way.

At one point as I drive the weary miles home over unlit back roads almost obscured by falling snow, with the darkness pierced only by my headlights, I had my annual flashback to a road trip three decades ago and three thousand miles away. It made me grin, as usual. I thought it might be fun to share the story. To my recollection, every word is true and accurate. So here we go.

I’m late twenties. Flat of stomach and strong of arm. Married to a different woman, with five dependent kids and a dog. In another country on another continent, and instead of a sleek modern Toyota I’m driving on the left behind the wheel of a beat up 1978 Ford Cortina that has seen better days. Don’t judge me, it was all we could afford. The suspension was shot and when I drove though puddles my feet got wet. Still, it was the family car and we loved it.

My sister’s offspring asked me for a ride to a job interview. In London. Three hours away on a good day. On a Saturday. So of course, being a good uncle, we left the kids in the hands of a babysitter, and nephew and I set off with my then wife ‘down South’. No Google Maps or Siri, my friends. This was old school navigation. “I know that area, we’ll find it when we get there”. And find it we did.

The snow started about two hours into the journey. Light, but persistent. It got heavier as the day wore on. By the time the interview was over, the planned sightseeing drive around London was clearly going to be a non-starter. The snow was coming down thick and fast. Cars were already hitting ditches, trees, and each other. So were the drivers. Time to get out of there.

I affectionately call the drive back the world’s longest skid. With 180 miles (around 300 kilometers) of highway ahead of us, I turned onto the On ramp and hit the M1 highway heading back North. One hour in we were still making headway, but slowly. Traffic was light as drivers hopped on and off between exits on the way home. It thinned noticeably by the time the rush hour was over. And it was dark.

With little traffic there were no tracks to follow and we slowed further because the road was no longer visible beneath a blanket of white. Two hours in, only us and the snow ploughs (this is an English story so that’s how I’m spelling it) were left. We tucked in behind one of these for the next hour, and followed it off the highway to a service station for warmth and a washroom.

Leicester Forest East service station is about half way home for us. We joined the huddled mass of misery for a cuppa tea and some chips. The stale and overcooked chips only added to the misery. Some people had decided to stay for the night, and I couldn’t blame them. It was not nice out there. But I was flat of stomach and strong of arm and feared nothing, so I led my intrepid band back to the car ready to face the rest of the journey. Remember, we had kids waiting for us. So… as it is my frequent want to say, onward.

The first challenge was finding the car. In the fifteen minutes or so we were inside getting warm the car had quite literally disappeared. Only snowy mounds occupied the parking lot and we had a few more minutes of fun wiping snow off random vehicles until we found the right one.

Once in the car, laughing at the excitement of it all, we faced the second challenge. Getting out of the lot. The snow was deep and undisturbed. I slapped a Queen cassette into the deck, cranked the volume, and our hardy band sang out loud as I played silly buggers fishtailing and wheel spinning our way back on to the highway. Off we went again. The snow was only up to the hub caps.

That was around the time that the heater stopped working. Bugger.

Without heat the car got very cold very quickly. Worse, the windscreen started to fog and then iced up. The wipers could not clear the windscreen and I was forced to manually wind the windows down (Ford Cortina) and stick my head out the window into the face of the oncoming blizzard if I wanted to have any chance of moving forward and eventually getting home.

We were the only vehicle on the road for the next two hours. Not even a plough. My only guide was the metal central divide. I made my own tracks in the ever deepening snow and tried to stay somewhere in the middle. Being alone in this three lane highway really helped. We kept singing, me through frozen lips and icy eyeballs but still not giving in. She threatened me with divorce. I told her I was changing my will. My nephew said he didn’t want the job. We laughed. And sang. And drove on.

The snow was by this time drifting and the car was close to being beached. And still it came down. But you know, we were happy. Everyone was comfortable and felt safe because I was flat of stomach and strong of arm, and even though the heater wasn’t working and the wipers were jammed and things were starting to fall off the car, we knew we would get home safe through the dark and the snow.

And we did. Eight and a half hours after setting off back on the three hour 180 mile (300 kilometer) journey we dropped off the majestic M1 and drove the remaining mile to our house with snow-softened smiles. Albeit smiles that were frozen to our faces. At least in my case.

More tea, followed by tales of our adventure around a roaring coal fire as we laughed and sang and farted and curled up, seven of us to a couch. And then the dog jumped up, too. Happy days.

The next day the TV news was full of warnings of death and destruction and hypothermia along with advisories not to leave the house unless you absolutely had to.

The country came to a standstill and was snowbound for the next seven days until this winter storm started to pass. Some people actually took snow days, which aren’t real things in the North of England. Ask me some time about the twins first day at school. But that’s another story.

It would be weeks until things finally returned to normal. I got the heater replaced as a priority. Returned to work. Nephew didn’t get that job because of the weekly commute, but he did get another one based on that interview. So the trip was a success. And an adventure. And a memory.

A memory that the snow I drive through on my way home tonight made me smile about. And laugh. Perhaps I’ll load my iPhone with Queen songs to sing on the way in tomorrow. Because I know I won’t be taking a snow day.

Even though I now have fully functional power windows, I may even wind them down and stick my head out as I sing, just for old times sake.