One more snippet from our 2019 road trip vacation to New York. We did many things, and went to many different places. Including the library. 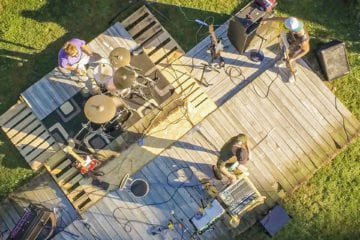 As a licensed drone pilot I am able to do things others can’t. Case in point, producing this unique video of a local band.

When the band started their sound check, I thought it would be fun to get a different perspective.

So I put my working head on, broke out the gear, and up went the bird.

This was a personal project, not for a paying client, so I could work any way that I chose. For what I had in mind, I shot in 4K slow motion. I like to do this, as it gives buttery smooth output and adds flexibility when the footage is brought into the computer. Among other options, I can speed it up to normal speed, zoom or crop in, and edit clips into ‘multiple cameras’.

Speaking of options, I later recorded a separate audio track of the band playing, in case I decided to make a regular music video of this. Once I got everything into the computer and reviewed it, that didn’t work for me. I still felt slow motion was the way to go: That was the look I wanted.

With the music track option nixed, I went with my original concept and added a foley track of a Summer’s day in the garden. With birds singing. Wind in the trees. All is right with the world. Peaceful.

Anyone that knows the band will know that ‘peaceful’ contrasts heavily with their hard rock writing style. Anyone that doesn’t know them may be teased into checking them out. I liked that idea.

After adding the band logo and some text, I threw in a few simple animations, and finished with an end card ‘Call To Action’. The resulting video gives the band something unique to share online.

Back down to earth

This is a quirky idea, something I came up with on the spot and wanted to try. It is intentionally and literally ‘Not A Music Video’. Like the concept or not, it’s different. I gifted it to the band and if it helps them generate interest or even get bookings, great. They’re nice guys, play good music, and I was happy to spend my own time putting this together.

The idea has found an unlikely fan base. Feedback from the band and the fans suggest they like this concept. I may sometime rework with a different audio track but I think not. I really like this.

Here, I was free to do my own thing, and have fun. Unpolished. Raw. Assembled from rough footage. I just sent up the drone and used what it came back down with. One take. Done. Imperfect? Sure.

But, so what? I wanted to have fun and… I had fun. For an off the cuff seat of the pants concept project I think it came out very well. The result is, to me, a success. I’m happy. Therefore.

Another short from our 2019 road trip. This time we’re wondering through Times Square on our way to the Schoenfeld Theater… on Broadway.

One more snippet from our 2019 road trip vacation to New York.

Where are we this time? And is Nikki in trouble? Watch and find out.

Dropping the second snippet from our 2019 road trip vacation to New York.

Where are we? Please take less than one minute from your day to watch and find out. Your comments, likes, and subscriptions are all welcome. TIA.